Today I was apart of the survey team led by John Roney and Mary Whisenhunt. We learned how to use a GPS to record discovered artifacts and to create site outline points for site mapping, both on paper and in GIS digital mapping. These two pictures show two of the sites discovered near the base of the Round Mountain by the survey team. The first site, located on a river terrace overlooking the Gila River, is a possible post- Mimbres site based on the pottery sherds found around the site’s several masonry pueblo roomblocks.  The second photo shows a rock ring not unlike the ones found at the top of Round Mountain. This site was also found on a river terrace overlooking the Gila and held two projectile points that date the site to a similar period as the Round Mountain site. Both sites were previously undocumented by archaeologists.

The flags seen in the photo were used to mark the location of pottery sherds. Not pictured, the several rattlesnakes that inhabit the ruins. 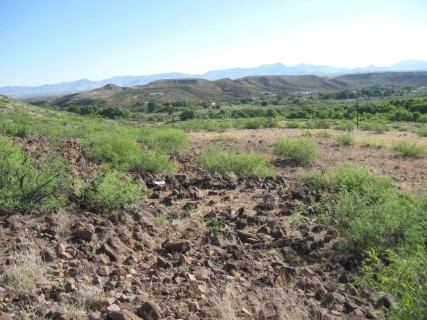 A rock ring located during survey